THE FUTURE OF WILDLIFE CONSERVATION is literally alive and well in Escondido. Future, a southern white rhinoceros, was the second calf  born via artificial insemination at the San Diego Zoo Safari Park. Born November 19, 2019, she joins Edward, the first artificially conceived white rhino in the Western Hemisphere. Together, they represent the Safari Park’s dedication to conserving the endangered rhino species. With only two northern white rhinos in existence in the world—both female—that population is precariously close to extinction. Researchers in the park’s Nikita Kahn Rhino Rescue Center are committed to changing that.

You can see Future and Edward frolicking in the mud or tagging closely alongside their mothers on any given day at the 1,800–acre park. But they’re only a tiny—700–pounds–plus—fraction of the animals in residence. The Safari Park is home to more than 2,600 animals representing 300–plus species from around the world. Perhaps best known for its expansive African Plains and Asian Savanna exhibits viewable via the African Tram, the park showcases animals that normally roam together in the wild——including rhinos, giraffes, and antelope——all living together harmoniously. If you’re a thrill-seeker, an exhilarating zipline gives you a bird’s-eye view of the savanna.

Unlike typical zoos, the Safari Park appeals to guests seeking cage-free wildlife viewing experiences that mimic animals’ natural habitats. Lions lounge in open enclosures. Elephants and their adorably carefree calves roam freely in the vast Elephant Valley. Kangaroos and wallabies come close enough to touch in Marsupial Alley, a walk-through exhibit in Walkabout Australia, where the newest residents are drawing a crowd hoping to catch a peek. Last fall, two platypuses made their way from Australia’s Taronga Zoo, Sydney to San Diego, as ambassadors of their species. The 8–year-old male named Birrarung and 15–year-old female named Eve are the only platypuses housed in a zoo outside of Australia. Catch a glimpse if you can! Elusive, fast, and smaller than expected, the duo play hide-and-seek with visitors to their state-of-the-art habitat.

And, welcome to the jungle——the Butterfly Jungle, where thousands of butterflies take to the skies in late spring. As an added treat through May 10, the Butterfly Jungle offers an immersive experience with thousands of butterflies representing more than 30 species of the colorful winged creatures. Wear bright colors and they may even land on you! It’s an experience not to be missed.

Whether you spend the day marveling at how fast a cheetah runs, catching a playful baby elephant discovering its trunk, watching a rhino calf wallowing in the mud, gazing in awe as dinosaur-like condors take flight, or hearing the king of the jungle roar, you’ll come away enlightened and feeling oh, so good.

Open 365 days a year, San Diego Zoo’s Safari Park is located 45–minutes north of downtown San Diego, off Interstate 15 in rural Escondido. With so much to see on the expansive property, you’ll want to arrive early to beat the crowds and the often-hot inland sun. And put on your walking shoes! The hilly property gives you quite the workout, even from the base of the parking lot to the entrance.

Expect to pay typical theme park prices. Parking is $15 and admission is $58 for adults and $48 for children, but it’s worth it to see so many exotic animals up close. The African Tram, a 25–minute attraction, is included with the price of admission. There is an extra cost for carts, caravans, and other behind-the-scenes safari tours, including the zipline. You’ll find abundant food options throughout the park and, to help calm your nerves after hearing a lion roar within earshot, beer and other alcoholic beverages are available for purchase. 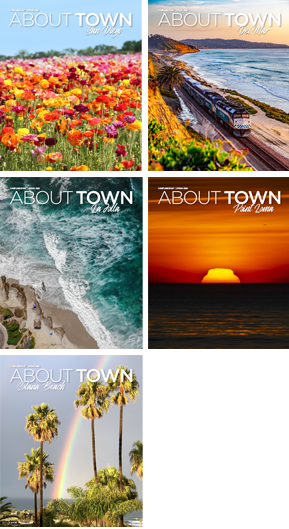 Do you have a great photo of La Jolla, Del Mar, Solana Beach, Point Loma, or San Diego that you would like featured on the cover of our next issue?

Email your photos by noon, May 29, 2020,  to: info@abouttownmagazines.com

The About Town Magazines  production team picks the cover photos.

About Town Magazines will notify you by June 4, 2020, if your image has been selected.

Go to abouttownmagazines.com to check out some of our previous covers.